Call: +27 11 802 5800 Email: info@livingstonessupplyco.co.za
Two years after cheetahs were reintroduced to Malawi, in Liwonde National Park, four individuals were safely translocated from South Africa to Majete Wildlife Reserve to form a crucial founder population and help grow the range of this vulnerable big cat.

A small founder population of wild Cheetahs has been successfully translocated from South Africa to Majete Wildlife Reserve, in Malawi, where cheetahs have not been present for decades. Cheetahs were entirely absent from Malawi for twenty years before a successful reintroduction returned them to Liwonde National Park in 2017. The translocation of four Cheetahs on Thursday, 25 July, resulted from a collaboration between African Parks, which manages Majete and Liwonde in partnership with Malawi’s Department of National Parks and Wildlife (DNPW), and the Endangered Wildlife Trust (EWT). Their introduction into the secure reserve supports conservation efforts to ensure the survival of Cheetah on the continent, and marks another milestone in the restoration of Malawi’s predator population. 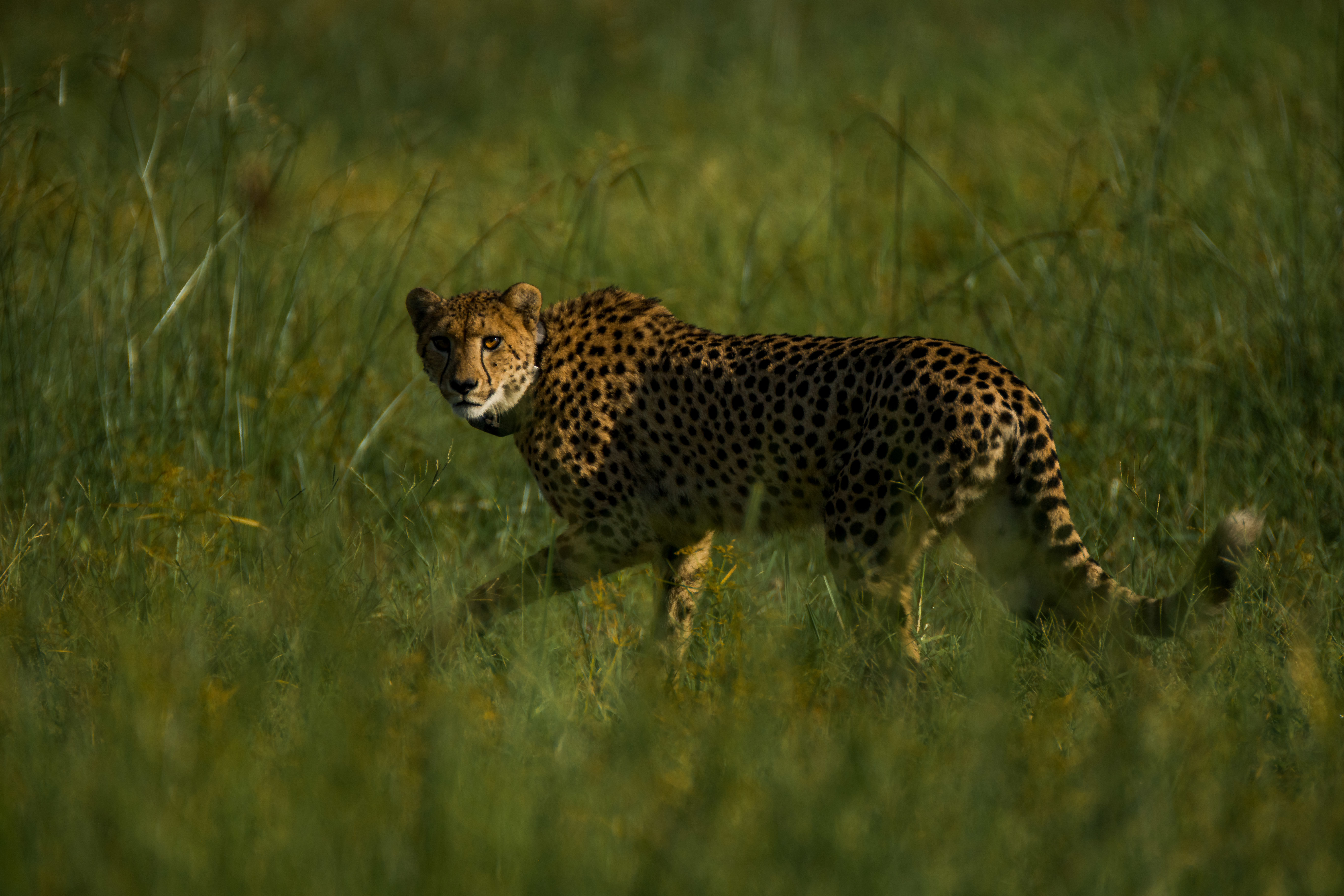 Cheetah in Liwonde National Park. Photo credit Olivia Sievert.
“Our partnership with Malawi’s DNPW and collaboration with the EWT is helping to ensure a future for an iconic predator species in decline. By bringing Cheetahs back to Majete, we have achieved another important step in transforming the once-depleted ecosystem into a thriving reserve while supporting critical predator conservation efforts in the region,” said John Adendorff, Park Manager of Majete Wildlife Reserve. He added, “Effectively managed parks like Majete create safe havens for wildlife and generate opportunities for millions of people to benefit from the development of conservation-led economies and from the long-term dividends of healthy landscapes.”
Donated by Welgevonden, Samara and Dinokeng Game Reserves and Rietvlei Nature Reserve in South Africa, the Cheetahs were flown to Lilongwe and transferred by road to Majete where they arrived safely on the evening of Thursday, 25 July. They were released into enclosures, where they will spend over a month acclimating to their new surroundings before venturing into the wider reserve. The animals are in good health and expected to do well in Majete, where habitat and prey conditions are optimal and measures are in place to ensure their ongoing conservation and protection.

Each individual was carefully selected by the EWT’s Cheetah Metapopulation Project, which creates safe spaces for Cheetahs while managing populations across reserves to ensure genetic diversity. The EWT considered a variety of factors when selecting Majete’s founder population, which are unrelated to the Cheetahs reintroduced to Liwonde in 2017, providing the foundations for a diverse and healthy gene pool in Malawi. “It’s really wonderful to be reintroducing Cheetahs into the 60th metapopulation reserve. We are grateful to African Parks and DNPW for creating 750km2 of safe space for wild Cheetahs. Majete has the ecological capacity to support an important viable Cheetah population,” said the EWT Cheetah Metapopulation Coordinator, Vincent van der Merwe. 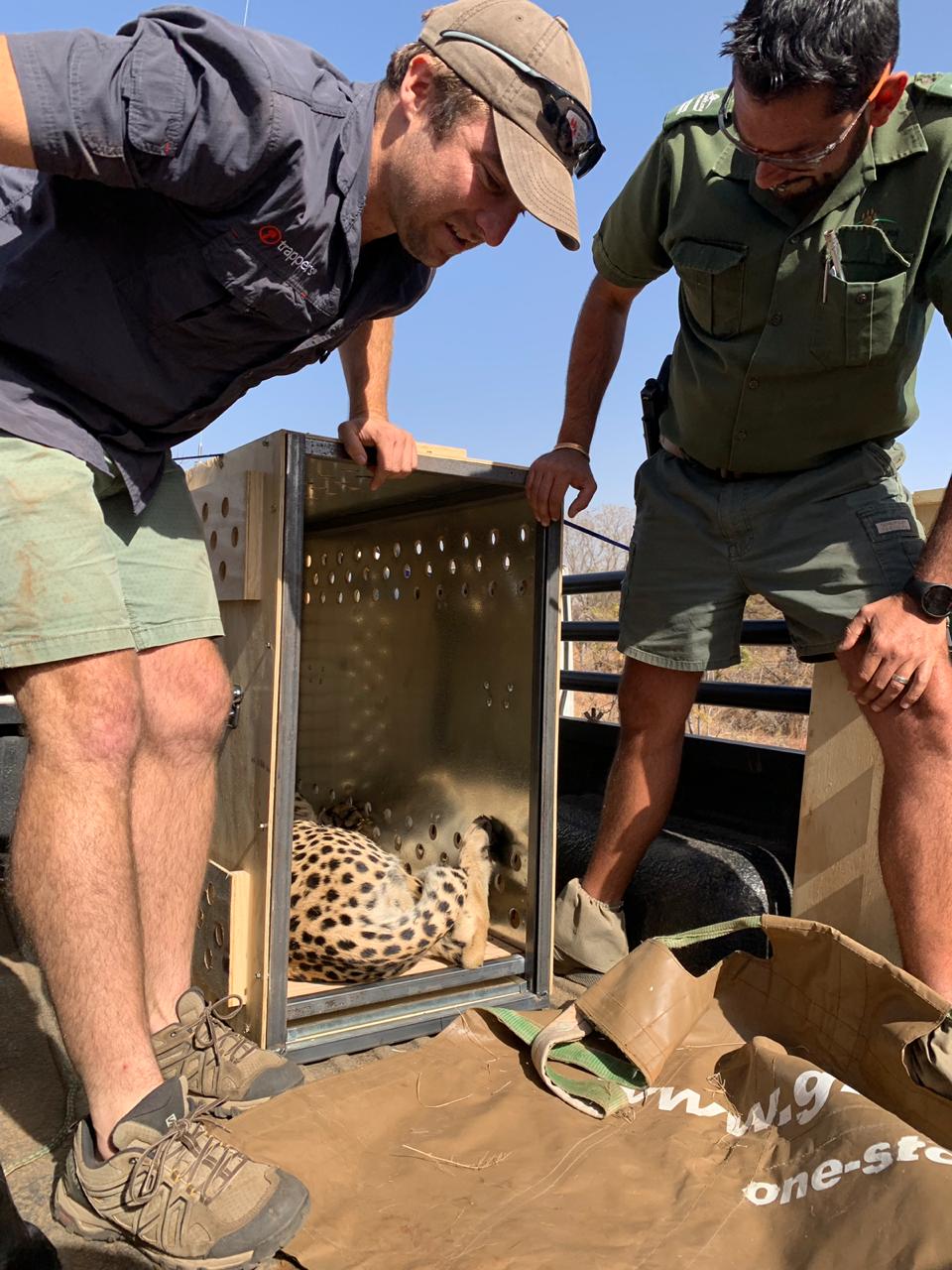 The EWT’s Vincent van der Merwe overseeing the translocation in South Africa. Photo credit Jo Taylor.
Historic records suggest that Cheetahs were present in the region around Majete several decades ago. However, due to decades of habitat loss, human-wildlife conflict and poaching, Cheetahs vanished from Malawi until the 2017 reintroduction saw their return to Liwonde National Park. African Parks assumed management of Majete Wildlife Reserve, the first park to enter its portfolio, in partnership with Malawi’s DNPW in 2003; and begun reviving the park by implementing sound law enforcement, community development and conservation programmes. Almost 3,000 animals of 15 species were brought back, including both leopard and lion, making Majete Malawi’s only home to ‘Big Five’ wildlife. Since then, the conservation efforts of the Malawi Government and African Parks have overseen a predator restoration plan for the region, with Cheetah and lion also reintroduced to Liwonde National Park in 2017 and 2018 respectively. With Majete secured wildlife in the reserve is flourishing, in turn benefitting local communities through sustainable tourism, livelihood opportunities and socio-economic growth.

Eradicated from 90 percent of their historic range in Africa, Cheetahs are listed as Vulnerable by the IUCN, and as few as 6,700 remain in the wild. While numbers have plummeted due to shrinking habitats and growing anthropogenic pressures, protected areas provide safe spaces that are critical to enabling population growth and range expansion, and to securing a future for the species on the continent.

The EWT is grateful to PwC for their support of the Cheetah Metapopulation Project.

About African Parks
African Parks is a non-profit conservation organisation that takes on the complete responsibility for the rehabilitation and long-term management of national parks in partnership with governments and local communities. With the largest counter-poaching force and the most amount of area under protection for any one NGO in Africa, African Parks manages 14 national parks and protected areas in nine countries covering 10 million hectares in Benin, Central African Republic, Chad, the Democratic Republic of Congo, the Republic of Congo, Malawi, Mozambique, Rwanda and Zambia. For more information visit www.africanparks.org, Twitter, Instagram and Facebook.

About Malawian Department of National Parks and Wildlife (DNPW)
African Parks and Malawi’s Department of National Parks and Wildlife (DNPW) have been working closely together to rehabilitate habitat and restore biodiversity to the country’s parks since 2003, when a public-private partnership was formed for the management of Majete. African Parks subsequently assumed management of Liwonde (and Nkhotakota Wildlife Reserve) in partnership with DNPW in 2015, following the successful track record achieved in Majete.

About the Endangered Wildlife Trust
The Endangered Wildlife Trust (EWT) has worked tirelessly for over 45 years to save wildlife and habitats, with its vision being a world in which both humans and wildlife prosper in harmony with nature. From the smallest frog, to the majestic rhino; from sweeping grasslands to arid drylands; from our shorelines to winding rivers: the EWT is working with you, to protect our world. The EWT’s team of field-based specialists is spread across southern and East Africa, where committed conservation action is needed the most. Working with its partners, including businesses and governments, the EWT is at the forefront of conducting applied research, supporting community conservation and livelihoods, training and building capacity, addressing human wildlife conflict, monitoring threatened species and establishing safe spaces for wildlife range expansion. Find out more at http://www.ewt.org.za.